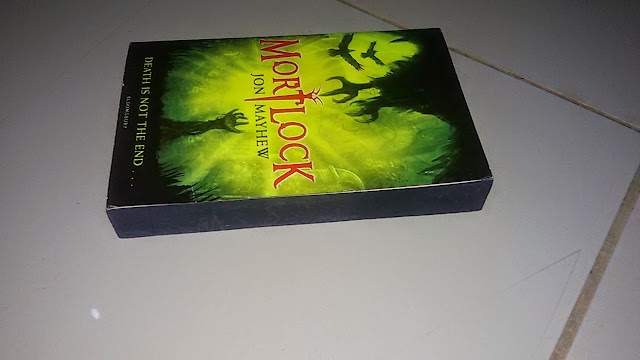 How utterly awesome is this?

That's not actually the reason I bought this book, just a bonus. A while ago I was planning a story with a character called Mortlock. No particular reason I thought of that name, but it was unusual and I wondered where I had gotten it from, so I did a Google search to see whether it had a meaning and whether or not anyone else had used it.

Jon Mayhew beat me to it.

Josie is a knife thrower in a magician's stage act.

Alfie is an undertaker's assistant.

They are both orphans and they have never met, but they are about to be given a clue to the secret of their shared past.

A past which has come to seek them out.

And while they flee for their lives, they must unravel the burning mysteries surrounding the legacy that threatens to consume them.

Curious to know what somebody else's Mortlock was like, I put it on my TBR list. The strange thing about our local Nakumatt is that every time I go in there I see a book I've been meaning to read. What with The Pinhoe Egg and now this, it's as though this Kenyan supermarket chain is inside my head, going through abandoned manuscripts and half-forgotten titles and then manifesting them on the shelf each time I go to pick up my groceries.

This is perhaps the most grizzly YA novel I've read in quite some time. Gothic to a tee.

She screwed her eyes tight shut as the cabinet toppled over with a bone-jarring crash. The false back of the cabinet splintered off, exposing Josie. She could see Ernie lashing out at the flapping ghul. A deep gash lined his scalp and blood streamed down his face, blinding him. His swinging fists could have laid any opponent low in a street brawl but the ghul bobbed and weaved in and out of the blows with ease. Ernie panted heavily, wiping the blood from his forehead. But the pause gave the crow its chance, and it darted forward, skewering Ernie with its long sabre of a beak. The big man's eyes bulged and he whimpered as the ghul pulled away. A disgusting squelch accompanied the strings of bloody gut that came away in the ghul's glistening beak. Silence fell as the foul bird jerked the gory load down its gullet, Then Enie's blood-chilling scream shook the theatre as the ghul fell upon him again, lashing with talons, ripping and tearing with its beak. Blood spattered the walls and mirrors and speckled Josie's face.

It's the sort of book I would have loved as a kid (and kids do, just look at the success of Horrible Histories), but I wonder at any adult who has the courage to read that out loud at bedtime. Still, I'm glad the option is out there.

It was a good read, and Mortlock himself didn't put in much of an appearance, but it's too unusual a name and too bold a title for me to use in the future. Plus, I doubt I'd have anything as cool as black-edged pages. 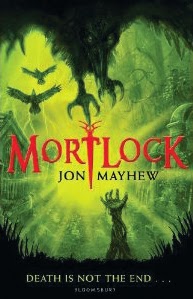