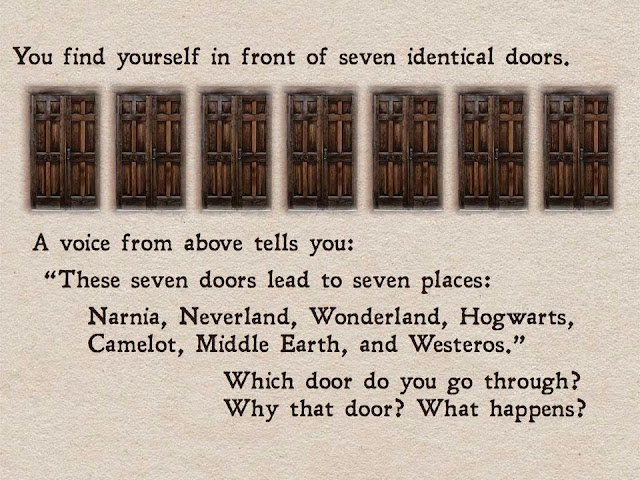 /me breaks out in anxiety sweats

Right, well, starting with a process of elimination:

I love Game of Thrones, and Westeros is one of the richest, most engaging fantasy worlds ever conceived of. A MUDer's wet dream. But I am absolutely certain, without a shadow of a doubt, that I'd either be stabbed, poisoned or sold into sexual slavery within five minutes of being there. So, for that reason, no.

Camelot's out. I couldn't take all that religious fervour, and I don't recall too many female knights.

I have to admit, I do quite like the idea of Hogwarts, although I've never actually read the Harry Potter series. It looks good fun on telly. But I imagine it would only be that much fun if you were in the cool gang, and I think I would make the unpopular decision of joining Slytherin. It would also mean consigning yourself to childhood and having to live in a school. I don't think I'd cope very well with that.

If you'd asked me this aged eight, the answer would have been Narnia. Who doesn't love Aslan? And I like the idea of being able to live an entire lifetime and then step through a wardrobe and live one all over again, because time has hardly moved. Or being able to pop back now and then to see people. But I also quite fancied the idea of being the Ice Queen, because if you are the Ice Queen, she can't scare you. Having visited the Ice Palace at Winter Wonderland last year, I  can assure you that a palace made of ice looks a hell of a lot prettier than it is pleasant to live in. So, if I can't be the Ice Queen because it's too cold, and I can't protect myself from her, I'd rather not go. Also, wasn't there that lake that turned people to gold? That was pretty scary. You're thirsty, you see water, you're dead. Not so sure about that.

Now it's starting to get very tough to choose.

I like Middle Earth, it was certainly the forerunner of Westeros in complexity, but I wouldn't want to be a Hobbit. I'd rather like to be an Elf and live in Rivendale, but that's perhaps a bit too perfect and Zen. I'd probably get bored. When I did one of those online quizzes, I came out a Ranger, so perhaps that. Roaming all over the place on horseback. But the constant threat of war would get a bit stressful after a while. I'd probably get sat on by an Orc or something, so best not.

I had to throw a coin.

Wonderland tails - it came up heads.

That's probably for the best.

Wonderland fascinates me for the same reason I don't think it would be a good place to live, because it is so completely off the wall. It is like a mushroom trip in that there is both extreme and vivid wonder, but also the potential for a mega downer of nightmaric proportions. It is utter madness, and the only way to survive it would probably be to go mad yourself. Which could either be fun, or seriously frightening. Possibly a bit of both in uncontrollable shrink and grow measures. So, as much as I'm delightfully attracted to it, Wonderland probably wouldn't be the best place in terms of mental well-being. I'd probably end up looking like something out of Madness Returns.

So, I guess that leaves the winner: Neverland.

Not one I immediately set out thinking yes to.

But not one I'm unhappy with either.

I like the idea that you never age. I think I would find that quite relaxing. That whole Terror Management thing would go out the window. I also like the sense that, in Neverland, adventures start because you choose them. You go and fight pirates when you want, you can hang out with Tiger Lily and the Piccaninny Tribe. I couldn't be a member of the Lost Boys, for obvious reasons, and I'm not sure I'd want to. Though I'd very much like to fly. Perhaps I'd become a pirate, but not an evil one. Maybe I'd commandeer a ship and a crew of my own and just go off treasure hunting, hanging out with the tribes, and occasionally climbing trees. I think, of all the places, Neverland would be the most relaxing to live.

However, if I had free choice, I'd rather open the door that leads to Howl's castle.

How wonderful would that be?

And, of course, once you were inside Howl's castle, you'd be able to open doors to anywhere else you fancied going.