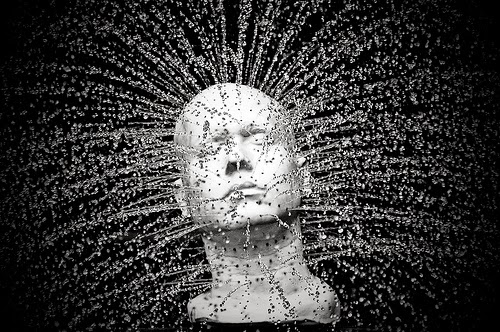 Blood Rose is officially the longest novel I've written. It's the fifth novel I've written, although the fourth one is unlikely to see the light of day as it was more cathartic than creative, and every novelist needs at least one manuscript in their closet to haunt them.

It was born at around eight minutes to midnight on 3rd January 2014, and the afterbirth followed at ten-past midnight in the form of a Prologue.

How does it feel? Well, you remember at school when you used to spend months studying for an exam, that final cramming session the night before, then you walk out of the exam room and wake up the next day realising that it's all over? Suddenly you don't know what to do with yourself.

Writing something of this length consumes you for so long, you spend every waking moment either writing it, thinking about it, avoiding it or berating yourself for avoiding it. Then suddenly it's over.

You'd think there would be a massive sense of achievement, or a wash of adrenaline, but mostly it's just an odd sort of nothing. Today I've been recovering by losing myself in social media and non-writing related projects. It hasn't quite sunk in yet.

And there's never a guarantee that a novel will ever be accepted for publication, so you do have to be slightly masochistic to write one in the first place.

For me, the next step will be to section the manuscript into chapters. I started out with chapter numbers, but towards the end I became so engrossed in writing that I didn't think about them. Given that this is a longer novel, I'd like the chapters to be longer too. I'll roughly divide up how many chapters I want, given the page count, and look for natural breaks to insert them.

Next, I'll take each section individually and begin combing through it. This is the first novel I've written where I haven't edited as I go. Quite frankly, it's a mess. The word count is a lot higher than I've quoted simply because many of the words are joined together where I didn't hit the space bar hard enough as I typed. Not editing as I go means that I've finished faster, but now need to spend quite a bit of time remembering what I wrote six months ago and checking not just that I've spelled it correctly, but that it fits with everything that went on to happen in the plot. Have I contradicted myself anywhere, brought someone back from the dead by accident, made the impossible impossibly happen or broken any rules of continuity?

This probably sounds a bit strange, as you'd expect someone to remember what they've written, but I assure you, by page 50 you're already skipping back to remind yourself what the minor characters are called, or what colour the wallpaper was in the main room. I was recently gushing at a friend of mine about how much I enjoyed one of his books. "Danny's such a good character," I said. He blinked and asked me: "Who's Danny again?" Stories are transient, and you do forget things.

For me, writing novels began a little over five years ago (so I'm averaging a novel a year, not bad!) when my friend Martine read the first chapters of something I'd written and started to demand more. I was a bit embarrassed at first, but we soon developed a symbiotic relationship. She would take pleasure in the stories, and I would learn from her feedback. I think most writers have someone like this, their Beta Reader, but it's such a trusting relationship, and I feel very lucky to have her. If she hadn't constantly demanded the next chapter, I don't think there would have been one.

I'm doubly lucky in that Martine went on to marry our lovely friend Ruirí earlier this year. He just so happens to be one of the finest qualified proofreaders about. For each section I get through, I'll send it off to them. They read, comment and proofread, then send it back to me so that I can make or ignore the changes.

Given the length of this one, and the state of it, this process may take a few months to complete.

The ultimate aim is to end up with a manuscript that is spit-polished and sparkling, as free from typos and continuity errors as it can be, so that I can begin the submission process.

I will continue to post under the Novel Idea tab so that you can follow along, if you're not already asleep!
at 18:46