Feeling fairly proud of myself.

Looks as though this is set to surpass my longest work to date: Lucid, at 92,000 pre-edit.

Although I did just get a message like this pop up on MS Word:

That'll be the 'write first, edit later' effect. I've never completed a first draft without editing as I go. Likely to be one sweet hot mess when I get to it, but looking forward to everything.

Guess it's also time to cut my nails again. Typing with talons does tend to cause your fingers to skit across the keys.

I'm feeling a little uneasy though, as I'm still not sure it'll all end well. I've taken to procrastinating with traditional pen and paper. I find I like swirly diagrams, drawn whilst half concentrating on Strictly Come Dancing. Sort of working out which characters go where to do what. Usually with more doodles than this. 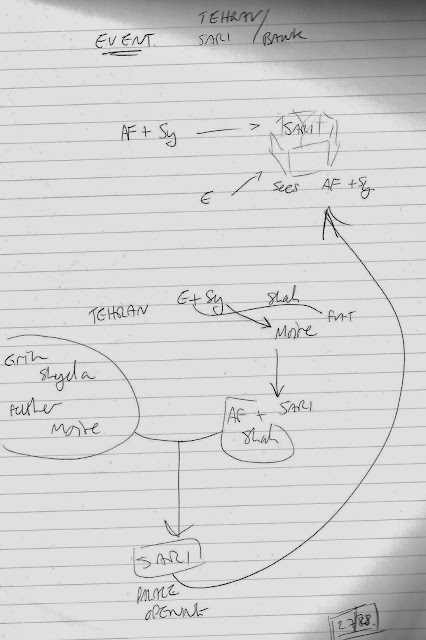 I re-work it on a daily basis as what I write fails to resemble in any way what I planned to write. Then I tick off the bits that get done.

Last night I realised that I've been at this for seven months, as I embarked on Blood Rose in May. It was already at 10,000 when I made that commitment, so I've averaged around 11,400 words per month. I'm not at all unhappy with that, as there has also been a lot of research involved.

Still, none of that really matters if the ending doesn't come together.