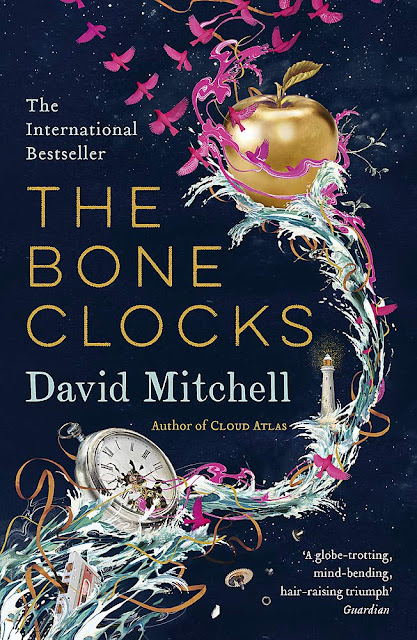 This is a rather rare, lukewarm review from me. I don't usually mention books I didn't get on with, because I don't read many. This one I will mention though, because there was something that very much caught my attention - see further down.

I am a huge Cloud Atlas fan, as I've often repeated - both the film and the book. On hearing this, a friend suggested I should check out The Bone Clocks, so I did.

I was surprised that Cloud Atlas came out ten years before Bone Clocks, because Bone Clocks seems like the lesser-developed novel to me. It feels like an earlier drafting of something akin to Cloud Atlas. There's a lot of interwoven themes, like Felix Finch, 'dear reader,' and a continuing vocal grudge against literary critics - which I'm extremely aware of as I set forth on my own review.

I'm being careful here because, as a writer, I'm loath to write negatively about other people's work, because I know what goes into it. Yet, as a reader, I do have an opinion.

One thing about David Mitchell, is that he's outstanding at literary portraiture. He can deliver a perfect study of a very real, believable character, such as Ed Brubeck and his life as a war reporter. Extremely detailed.

The start of the book was outstanding. Really entertaining, with an unexpected and fascinating turn of events. It dragged me right in. The ending wasn't bad, either - the complete collapse of society. But it just felt like the threads weren't really connected throughout, and I didn't always care enough for a character to want that much detail about their lives, especially as it didn't seem to lead on to anything. You got to know a character intimately, then that's it. On to the next. For this reason, it was a slow burn. Lots of character detail, then a massive psychic battle that was more tell than show - lot of back story explained by one character to another - and then the curtain falls.

Cloud Atlas was also massively fractured between timelines, but it ricocheted back on itself to form a complete and engrossing story.

And that's me, that's not the book. We all connect differently with different things. It just didn't sink in. However, once I start something, I find it extremely difficult to leave it unfinished, so I did have a play with the audiobook speed settings. I felt guilty, but I did that. And I got to the end. And it was interesting, just not compelling - for me.

I actually enjoy books I don't enjoy, on some level. They teach you something about yourself, what you're seeking in a story and how you interpret narratives. It's interesting to explore why we don't chime with some stories but we do with others. I think this one was just about pace.

There were a few cute lines:

My heart's a clubbed baby seal.

But the thing that really stood out for me, bearing in mind that this was published in 2014, is that Mitchell appears to have guessed half the plot of QAnon.


The part that really stands out in that video:

Hillary Clinton, Oprah Winfrey, Tom Hanks and others, eat children in order to extract a life-extending chemical from their blood group.

In a nutshell, that's what the cult of the Anchorites do in Bone Clocks - they distill and drink the blood of children in order to extend their lives.

So, definite kudos to Mitchell for seeing that one coming. I'm just hoping he was a little wider of the mark in terms of the complete collapse of civilization. Sadly, he probably isn't, but let's see where we get to. We're headed for a very heavy population drop in about a hundred years, so there's a little hope if we haven't managed to wipe ourselves - and everything else - out by then.
at 10:44