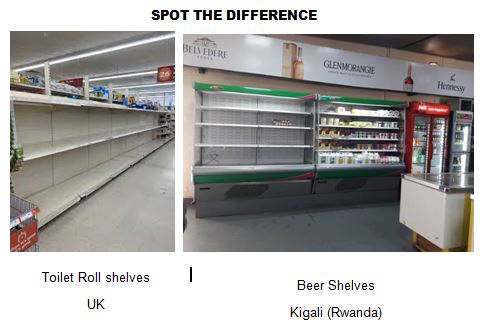 I took a picture in the local supermarket in Kigali the other day - all the beer was gone, but there was still plenty of toilet roll. Dad put the above together to illustrate priorities. Legend.

Sitting here talking to my computer and counting down. At midnight tonight, so about three hours our time, the international airport is closing. No commercial passenger flights going in or out for the next thirty days.

There's a lot of foreigners staying here. Mostly because it's home. If we're going to get sick, might as well be in our own beds, in our own homes, where friends can throw food over the gate if we need it. Also because most of us trust the government here to do a better job than many of our own are. I have an Italian friend working for an organisation here. She didn't much fancy going back. Watching the way the UK government is reacting doesn't fill me with confidence, either. Whereas Rwanda has been on high alert for Ebola since 2015. It's got a proven record of being pretty good at virus containment. They've acted swiftly and consistently. I'm happy to ride it out here.

One of the measures has been to remove visors from all moto helmets. Motorbikes are a common form of public transport, but swapping helmets isn't all that hygienic. The picture on the left is from the first day the measures were introduced and I didn't know. Now I have my old university beanie and a pair of shades to prevent bugs getting lodged in my eye. I like the new look.

Today, I said goodbye to my friend Nick. He's with Peace Corps and they've all been evacuated on a private charter back to the US. It cut his placement short by about six months and I'm going to miss him. We weren't allowed to hug goodbye, so we took this picture with him a few metres back. Our first attempt (right) was not quite as successful. 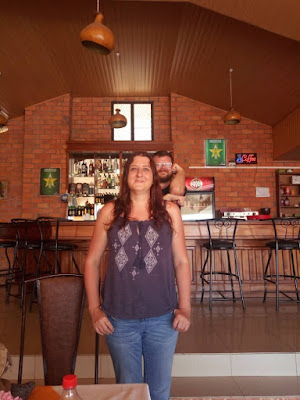 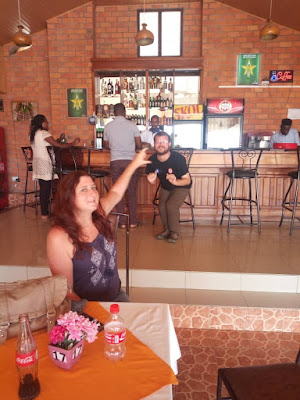 Even though you're happy, there's still a moment of mild unease. Being a writer and a homeworker, I'm used to self-isolating even when there isn't a pandemic, but when you suddenly know that you can't go out something inside really wants to. I think everyone's feeling the same. Even though you're fine where you are, knowing you can't leave can be a bit of a strange sensation. Thankfully, life is still pretty normal here for me, though I am mindful that for some this is going to be a very rough ride. Especially those in the tourism and service industries, and who face financial difficulties because of it.

Wherever you are, whatever you're doing, stay well. As we say here, turikumwe, komera (we are together, be strong).
at 21:24