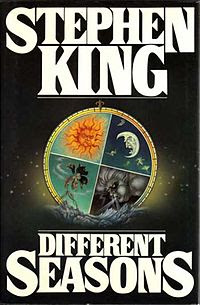 I recently got around to reading something that has been on my 'to do' list for a very long time.

I'm a huge fan of the film Stand By Me. Since I love the film so much, I've always wanted to read the original story - to find out where it came from.

I'm like that with a lot of things. Some people prefer to read the book first, whereas I tend to decide whether I want to read a book after I've watched the film, on the understanding that a film is simply an interpretation and, if I like it, I'll probably love the book even more because I'll get all the gritty details the film missed out.

Also, it's generally easier to be disappointed with a film adaptation of a book you love, than with the original book of a film you love.

As King himself once said: “Books and movies are like apples and oranges. They both are fruit, but taste completely different.”


So, it was with great relish that I Kindled a copy of Different Seasons, which is the collection in which The Body (the original Stand By Me) appears.

I didn't read anything about the collection before starting it, and my hart sank a little when I realised The Body came third, and I'd have to make my way through two other stories first - because that's me, I can't skip straight to the bit I want. It wouldn't be right unless it were a reference book.


Out of impatience, I dived right into the first story without actually bothering to pay much attention to the title. Something about Rita Hayworth. It wasn't until a few pages in that it clicked what I was reading - The Shawshank Redemption! Currently #1 in the IMDB top 250 film ratings and listed countless times in 'best film' polls.

I have seen the film, but truthfully don't remember much about it. The only lingering taste of oranges being that Red, despite being named for his hair, was firmly implanted in my mind as Morgan Freeman.


Next came Apt Pupil. This stunned me. It came at a point where a close family member had asked where the 'darkness' in some of my stories comes from. It unnerved me, because I'd started to feel that what I write is a tamed version of what I could write. And if the tame version raises eyebrows...well.

This particular story holds back on nothing.

I found myself feverishly composing a letter to Stephen King at 4am, expressing my amazement that he'd 'gone there', and asking what his mother made of Carrie. Knew I'd never send it, but helped to rationalise a few things in my own mind. Maybe one day I will build up the courage to slues darkness forth upon the page. Growing up I loved King and Hutson, but even today I'm hard pressed to think of women who come out well in that genre. I think there's still a social 'something' going on there. Or perhaps it's just easier to imagine writing those things than to deal with the consequences of actually writing them. The sort of stories you might write and then hide.


Whatever the cause of my cowardice, it serves to boost my admiration for this particular story. A nauseatingly fine piece of narrative. Turned my stomach a fair few times. Compellingly close to the bone. Called to mind a recent news article announcing investment in a research study into genocide tourism and why people flock to places like Auschwitz, Murambi, Gisozi etc. I wonder whether the study will look deep enough.

I thought about that story for many days after I finished it.

Finally, I made it to The Body!


It didn't disappoint, though I had the same problem as Shawshank in that the kids will forever be Jerry O'Connell, Corey Feldman, Wil Wheaton and River Phoenix. And they will always be walking down the road to 'Lollipop, lollipop, oh loli-loli-loli lolipop' *pop* 'ba darr darr darr.'

After that came a very strange story: Breathing Lessons. It was almost two stories in one. An elderly gentleman joins an Old Boys' Club where they listen to stories - and the story is one of the stories told there. Although this is the only one which returns to King's trademark horror, it is actually the Boys' Club I remember best: the very strange butler and the slithering beyond the door that is never fully investigated. The horror story seems to wrap itself up neatly, but it's the unanswered questions raised in the club that kept me awake.

Just when I thought it was all over, perhaps the best bit at the very end, where King talks about when the stories were written and how the compilation came about:

Each one of these longish stories was written immediately after completing a novel - it's as if I've always finished the big job with just enough gas left in the tank to blow off one good-sized novella. The Body, the oldest story here, was written direct after 'Salem's Lot; Apt Pupil was written in a two-week period following the completion of The Shining (and following Apt Pupil I wrote nothing for three months - I was pooped); Rita Hayworth and Shawshank Redemption was written after finishing The Dead Zone; and The Breathing Method, the most recently written of these stories, immediately following Firestarter.

None of them has been published previous to this book; none has ever been submitted for publication. Why? Because each of them comes out to 25,000 to 35,000 words - not exactly, maybe, but that's close enough to be the ballpark. I've got to tell you: 25,000 to 35,000 words are numbers apt to make even the most stout-hearted writer of fiction shake and shiver in his boots. There is no hard-and-fast definition of what either a novel or a short story is - at least not in terms of word count - nor should there be. But when a writer approaches the 25,000-word mark, he knows he is edging out of the country of the short story. Likewise, when he passes the 40,000-word mark, he is edging into the country of the novel. The borders of the country between these two more orderly regions are ill-defined, but at some point the writer wakes up with alarm and realizes that he's come or is coming to a really terrible place, an anarchy-ridden literary banana republic called the 'novella' (or, rather too cutesy for my taste, the 'novelette').

Now, artistically speaking, there's nothing at all wrong with the novella. Of course, there's nothing wrong with circus freaks, either, except that you rarely see them outside of the circus. The point is that there are great novellas, but they traditionally only sell to the 'genre markets' (that's the polite term; the impolite but more accurate one is 'ghetto markets').....But for novellas which can, on measure, only be described with the word 'mainstream' (a word almost as depressing as 'genre')... boy, as far as marketability goes, you in a heap o' trouble. You look at your 25,000-to-35,000-word manuscript dismally, twist the cap off a beer, and in your head you seem to hear a heavily accented and rather greasy voice saying: 'Buenos dias, señor! How was your flight on Revolución Airways? You like to eeet pretty-good fine I theenk, si? Welcome to Novella, señor! You going to like heet here preety-good-fine, I theenk! Have a cheap cigar! Have some feelthy peectures! Put your feet up, señor, I theenk your story is going to be here a long, long time... qué pasa? Ah-ha-hah-hah-hah!'

I don't think there's a novelist anywhere who can't appreciate that sentiment.

He also goes into how he became typecast as a horror writer. Refreshing to read both his words as an author and the variety of stories he's written. I haven't settled on a genre yet, which is perhaps why I struggle to get very far. What was true in 1982 is true today - the industry isn't built for multi-genre authors, nobody knows what to do with them.

It seems several authors have had to hide their versatility, only to bring it out as a party trick later down the line. 'Ta dah!' - I could do this all along! Triple somersault, Arab spring.


Aaaanyway, I cannot recommend this collection enough. I thoroughly enjoyed it. Just like the title suggests, it's a real mixed bag, but with a nod and a wink throughout; all taking place in the same town, you discover the old man in Apt Pupil did his banking with the jailed accountant in Shawshank. Little in-jokes that make you smile as you work your way through.

I don't feel so bad about my genre-drifting issues anymore.