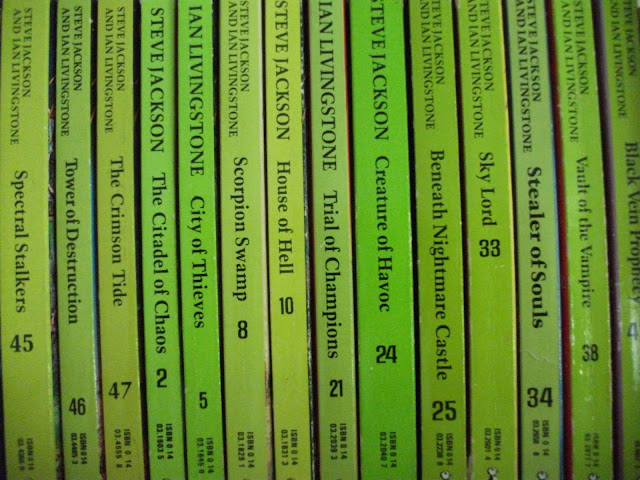 Resurrection of a past era.

When I was about ten or eleven, I was in WHSmith - book section (naturally) - choosing something to read on the train. I had recently gone to live with my mum, so Dad would come and collect me every fortnight for the train ride to London.

The book that I chose was Vault of the Vampire. 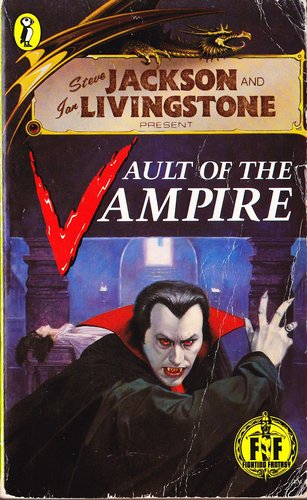 My decision was based purely on cover art, I didn't bother to look inside. I was going through a vampire phase at the time. Anything with fangs had to be good.

I remember feeling bitterly disappointed when the joy of seeing how short the chapters were dissolved into the realisation that this wasn't actually a storybook at all.

About to bin it, the sheer length of the journey forced me to take another look - thus spawning an adolescent love affair with Fighting Fantasy.

If you haven't seen them before, they're sort of a cross between Dungeons & Dragons and Point Horror. Each chapter is about a paragraph long. At the end, you have to make a decision - do you go left or right at the end of the hallway? Do you talk to the slightly dodgy guy in the corner sucking his pipe? Do you open the trapdoor?

Occasionally you get into fights. Dice are required for this, and there's a set of rules and a game sheet at the beginning. If you lose, you have to start again (or cheat). Often the storylines throughout the book are fairly complex and several choices lead to dead ends.

It can get ridiculously addictive. But then, I was brought up on text games. Before all these swanky graphics and VGA monitors, computer games were all like this. Glorified Fighting Fantasy novels. To me, these were just the portable version (long before laptops).

Sometimes I'd forget to bring a book and Dad and I would sit on the train making up stories in the same format. We'd take it in turns to come up with a paragraph and a decision to make. Passed many hours that way. In my late teens I eventually started coding MUDs (Multi User Dimensions) - which were (are?) like huge, international FF books with lots of players.

FF cover all the major bases in storytelling: there's always a beginning, middle and end to your adventure, there's a quest - something you have to achieve - there's adversity and conflict, there's dialogue and character interaction... you're soaking all of this stuff up as you're playing.

Anyway, the other day I was sitting watching my nephew trashing hell out of Transformers on his PlayStation. I felt a swell of pride that he'd opted for Decepticons (the baddies).

Mum wandered in and I said something along the lines of 'he's really into that, isn't he?' To which she replied 'yes, but he loves his books too.'

It's true, my nephew is an avid reader. He's currently into Captain Underpants and Diary of a Wimpy Kid.

Aha! thinks I. A kid who likes reading and gaming.

So, I've just spent the day rooting around in my old room, scouring the bookshelves of my (mostly mispent) youth. I've managed to find 17 volumes in total. 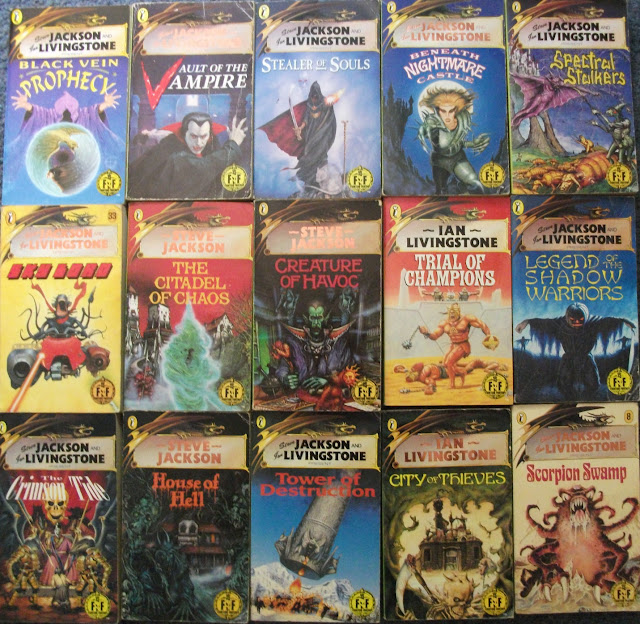 Plus my pride and joy: 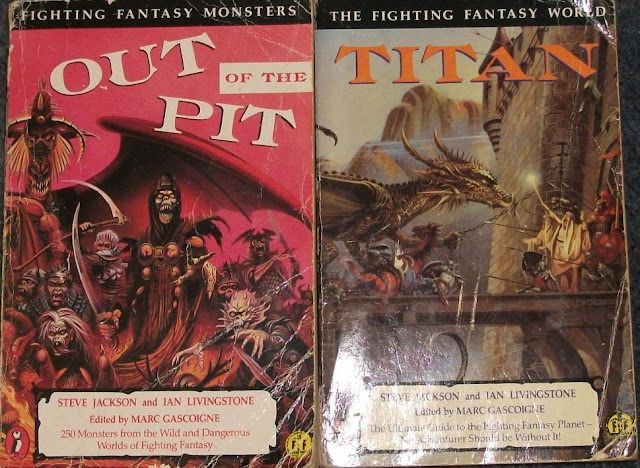 Those last two are sort of like the fanatic's guide to all the animals and cities mentioned in the books. I remember sitting in Mum's office at probation service one Baker day, drawing ground plans for a seedy tavern in Port Blacksand. You can see they've been studied closely.

So, things come full-circle. My nephew is nine now. I've stacked them all up by his bed for the next time he visits. It just remains to be seen whether he'll take to them. I hope so. It would be nice to think they've gone to a good home.