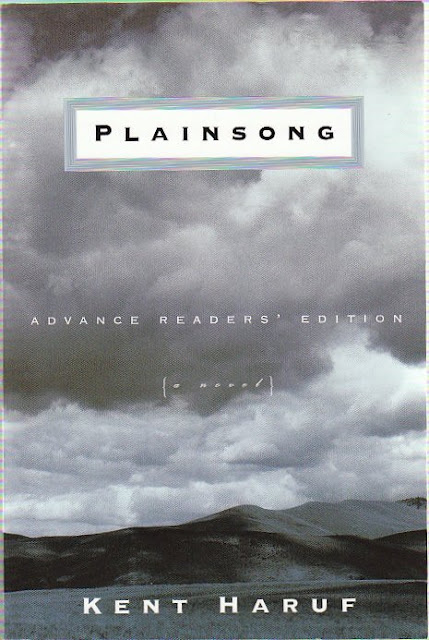 Well, it's one-thirty in the morning.

Back in January, I was walking by Islington canal when I encountered a book barge. A narrow boat full of books, replete with cats and wood-burning stove. My idea of floating heaven.

I hopped aboard and, late for a bus, had to make a hurried decision.

I came away with a copy of Plainsong by Kent Haruf. Hadn't heard of it but, according to the reviews, it was pretty big in 1999/2000. Inside, it also lists his first novel as The Tie that Binds, which I haven't read but have heard of by reputation. No relation to the '95 film of the same name.

I put the book in my bag and liberated it from the waterways, then rediscovered it the other day and sat down to read it.

Within the first few pages, I was sure that I wasn't going to like it. I felt quite disappointed at this, having found it in such an auspicious place. I had been so sure that any book I happened to choose from the shelves on that day, in that place, couldn't possibly be bad.

First off, it was set in the American Midwest. Both this and The Tie that Binds are set in Holt County, Colorado. The language reflects that. It's so straightforward you can see the horizon. Worse, though - there's not a quotation mark to be seen! Nothing distinguishes dialogue from action except for the occasional line break.

It's formatting Jim, but not as we know it.

I was absolutely ready to hate it.

Until I realised how short the chapters were.

In realising this, I read a couple of them.

Suddenly, it was over.

Kent Haruf, I doff my cap to you sir. That there's a mighty fine read.

It is thoroughly deceptive in its simplicity. I went to google it halfway through and actually found myself typing in Simplesong. It takes me a while to catch on.

It's told from several people's perspectives, all of whom speak simple. Yet there are vivid moments of happening that just suck you in like a vacuum. I was interested by voyeurism at the window, I was engaged by the dusty description of cattle ranching; by the dead horse, I knew that I was sitting it through to the end. It was read quickly, because it was easy, yet left a lasting impression.

There's a character called Roubideaux. What a wonderful name! And two young brothers, nine and ten, mirrored in two older brothers well into their twilight years. Unusual, and clever. When little Roubideaux goes into labour, the older brothers panic and inform her that: "in effect altogether she should hurry up and do it in a slow way."

I smiled at that, and admit to shedding a tear at the homecoming.

Nothing in the book takes you wholly by surprise. There's no soaring climax or plunging hidden depths.

It's just a story. As the title suggests, a plain song.

I'm challenged by that. In this day and age of 'the first three chapters' - books so slick you could oil your car with them - it's nice to know that there is still a place for simple storytelling. For a little look into people's lives somewhere far away. I really enjoyed it. Feels a bit like I've been on holiday for a couple of days.

Guess the book barge was a magical place after all.
at 04:15