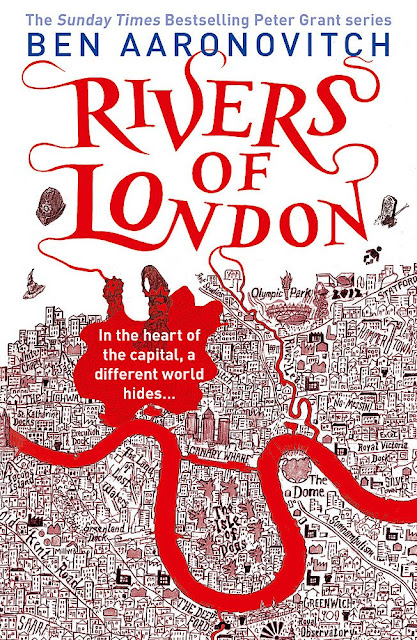 Down the sodium-lit streets, along roads that have been traffic-calmed to within an inch of their life, Peter Grant is trying to subdue the spirit of riot and rebellion:

My name is Peter Grant and until January I was just probationary constable in that mighty army for justice known to all right-thinking people as the Metropolitan Police Service (and as the Filth to everybody else). My only concerns in life were how to avoid a transfer to the Case Progression Unit - we do paperwork so real coppers don't have to - and finding a way to climb into the panties of the outrageously perky WPC Leslie May. Then one night, in pursuance of a murder inquiry, I tried to take a witness statement from someone who was dead but disturbingly voluable, and that brought me to the attention of Inspector Nightingale, the last wizard in England.

Now I'm a Detective Constable and a trainee wizard, the first apprentice in fifty years, and my world has become somewhat more complicated: nests of vampires in Purley, negotiating a truce between the warring god and goddess of the Thames, and digging up graves in Covent Garden ... and there's something festering at the heart of the city I love, a malicious vengeful spirit that takes ordinary Londoners and twists them into grotesque mannequins to act out its drama of violence and despair.

The spirit of riot and rebellion has awakened in the city, and it's falling to me to bring order out of chaos - or die trying.

I really enjoyed this one. It fell into a sub-genre of novels I really like, where institutional bureaucracy meets the fucking insane. In this case, the spirit of Punch & Judy, with a Punch who can split your face wide open.

I'm a latecomer to this, but it seemed at one point it was on everybody's bookshelves. I'd always liked the cover and so, when I saw it on Audible, I thought, 'I'll have that.' Kobna Holdbrook-Smith is an excellent narrator and really carries you along on the current.

The book provides some useful advice for life:

When I'm considering this I find it helpful to quote the wisdom of my father, who once told me, "Who knows why the fuck anything happens?"

And a few really interesting snippets of London history:


‘I am Jack Ketch,’ I said, and this time I felt it carry out to the audience. I got a ripple of vestigia back, not from the people but from the fabric of the auditorium. The theatre remembered Jack Ketch, executioner for Charles II, a man famed for being so unrepentantly crap at his job that he once published a pamphlet in which he blamed his victim, Lord Russell, for failing to stay still when he swung the axe. For a century afterwards, Ketch was a synonym for the hangman, the murderer and the Devil himself: if ever there was a name to conjure him with, then it would be Jack Ketch.

In 1861 William Booth resigned from the Methodists in Liverpool and headed for London where, in the grand tradition of metropolitan reinvention, he founded his own church and took Christ, bread and social work to the heathen natives of east London. In 1878 he declared that he was tired of being called a volunteer and that he was a regular in the army of Christ or nothing at all; thus the Salvation Army was born. But no army, however pure its motives, occupies a foreign country without resistance, and this was provided by the Skeleton Army. Driven by gin, bone-headedness and growling resentment that being the Victorian working class was bad enough without being preached  at  by  a  bunch  of  self-righteous  northerners,  the  Skeleton  Army  broke  up  Salvation  Army  meetings, disrupted marches and attacked its officer corps. The emblem of the Skeleton Army was a white skeleton against a black background – a badge worn by right-thinking ne’er-do-wells from Worthing to Bethnal Green.

Rivers of London by Ben Aaronovitch is a dark, fun frolic of a book, and the start of a long-running series.
at 10:22